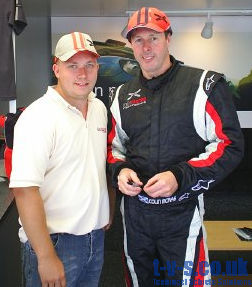 Ralph’s career started with Protec Controls Ltd, based in Reading, where he quickly progressed to head up the service and installation department. Customers included Vodafone, Gowrings (now Inchcape), Bennetts Insurance and Lancaster Jaguar.

Ralph started motorsport in 1997 in the MG Car Club hill climb and sprint championship, in his race tuned MG midget. He scored an impressive second in class in both his debut and second year. In 2000, we were invited to take part in the MG car club display at the 24 hour Le Mans race which makes Ralph one of the few privileged drivers to have driven the complete circuit with a 4 lap display race.

2002 saw Ralph progress into tarmac stage rallying. The Midget was sold to make way for a Honda Civic Group N rally car (which he converted from a standard road going Civic VTI). Ralph achieved one second in class and two third in class victories over the following two seasons. During this period he managed to gain sponsorship from Mannix UK Ltd, a high end alarms specialist company. Mannix quickly realised Ralph’s potential and employed him as a technical consultant.

In 2006 Ralph bought a Talbot, which he be rallied in the following season.  His next project was a Mk1 Escort which Ralph which he has been racing over the past few seasons.